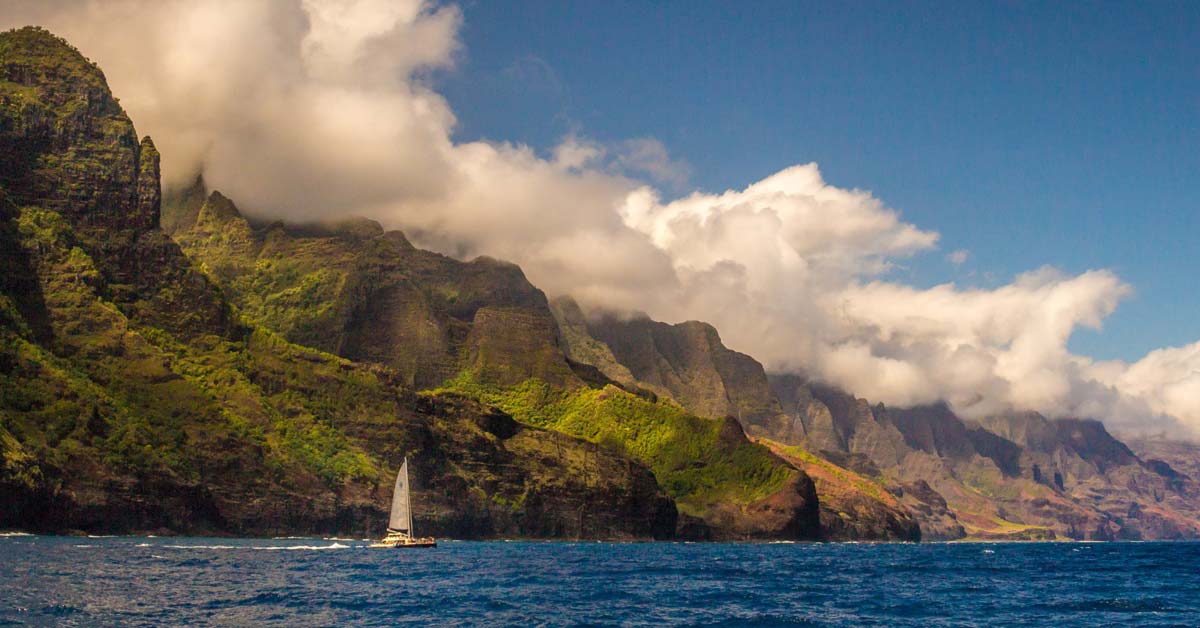 If you're still new to sailing and trying to find your foot in the adventurous activity, one of the most important questions to ask is; when is the best time to sail? Well, this may depend on many variables but chief among them is the weather.

As any experienced sailor will tell you, it's utterly difficult to just set sail and set off into the sunset. Knowing the best time to sail is one of the most important considerations that any sailor must undertake before setting sail. And although it's quite possible to sail when the season isn't right, you certainly do not want to find yourself out there in the middle of a devastating hurricane. As such, knowing when is the best time to sail will not only make your sailing experience a lot better, enjoyable, and safer but will also make sailing a lot easier since you'll rarely encounter precarious or deadly situations.

While many variables should be considered when looking at the best time to sail, the most important thing is the weather or season. For example, many sailors prefer to sail during the summer when the weather is warm. On the contrary, you want to avoid sailing during the hurricane season. With that in mind, the best time to sail will hugely depend on the weather patterns of your sailing destination and, of course, how safe you are sailing in that given weather condition.

In this article, we'll look at the best time to sail in the US as well as in a host of other sailing destinations around the world. This will at least help you plan your sailing adventures well and stay safe.

The Best Time to Sail in the United States

Given that the United States is pretty large, it can offer a few different sailing experiences with each area having a very different best time to sail.

East Coast (December to February and March to June)

With over 6,000 miles shoreline, the East Coast of the USA offers an incredibly massive sailing ground that's all there for you to explore. The East Coast offers warmer months and cold winter months in equal measures so you can choose the best time to sail depending on what works for you as long as you avoid the Hurricane months.

If you're planning to sail along the shores of New York, Boston, or Montreal, you can consider sailing from March to June just before summer. You'll not only have miles and miles of water all for yourself but the weather will be a lot warmer and enjoyable.

While there's a possibility that the hurricanes can meander into the West Coast especially close to Mexico and southern California from June to December, they're generally very rare. As such you can go out and sail but you have to be on top of the weather forecast and avoid venturing out altogether if there's a possibility of a hurricane.

During summer, which is ideal for sailing on the West Coast, you can expect strong ocean breezes, which is caused by intense land heating. You can also expect swelling of the Pacific, as well as high pressure off the Californian coast.

However, the best time to sail on the West Coast is September through January. The West Coast shores are sunnier and many sailors, especially those with huge boats will attempt sailing through the Panama Canal. So depending on which side you're sailing on you can get a different outlook of Central America and Latin America.

If you're looking for a party atmosphere, the Mexican Riviera can be a great destination but the best time to sail there is during the dry season, which is between November and May. This can be a nice escape cove if you are from the north. You should also remember that February and March are peak whale season in the Mexican Riviera, which goes a long way in enhancing the wild and boisterous atmosphere.

Alaska (May to August)

The northwest offers some of the most scenic and naturally gorgeous places in the world and you can best enjoy them when sailing or by sea. You can sail around Anchorage, which is the capital of Alaska or you can venture deep into the sea and explore the smaller towns and regional centers.

Southeast (May to July and November to February)

The region around Florida to the Caribbean is built for sailing. It's an extremely expansive area that is sunny all-year-round but you may want to avoid the hurricane season, which runs from June to November.

The Best Time to Sail in Hawaii

Sitting on a bubble of its own, Hawaii offers perfect weather for sailors all year-round.

In addition to the relaxed lifestyle and sumptuous cuisines that the island is widely known for, you can enjoy the calm and cool breeze, as well as an everlasting vibrant holiday and sailing atmosphere.

The Best Time to Sail in the Caribbean

As one of the best sailing destinations in the world, the Caribbean offers some of the best playgrounds for sailors. The best time to sail in the Caribbean is all-year-round save for the hurricane season, which is between August and September.

If you want to sail in the eastern Caribbean from St. Thomas to Grenada, you can consider sailing in the early summer through March to June. During this time, there are fewer tourists, fewer clouds, and fewer squalls. The weather patterns are more settled, the tropical fruits and flowers are aplenty, and the wind speeds are around 25 knots, which are ideal for sailing.

Late November and December are, however, the best time to sail in the Caribbean as the trade winds are highly favorable and the storm risks are moderately low. You should be aware of the easterly waves and troughs as they can bring heavy rains and gusts, especially at night.

The Best Time to Sail in the Mediterranean

The best time to sail in the Mediterranean is between May and October. You should, however, avoid peak season, which is between Mid-July and late August, as some of the best sailing regions such as the French Riviera, Adriatic Sea, and the Northern Ionian Sea will be overcrowded.

As such, early spring can be ideal because the sailing regions aren't overcrowded and the temperatures are mild and comfortable.

The Best Time to Sail in Australia

The best time to sail in Australia is between late November and March. While it's the peak winter season in North America and Europe, you can choose to head to Australia and enjoy your summer sailing in Sydney, Perth, and Adelaide. Given that it's summer in Australia, you can expect huge crowds out in the ocean as many Aussies are on vacation.

Better still, winter temperatures aren't extreme in Australia so you can venture out during winter in Australia if you enjoy sailing when there are fewer crowds.

The Best Time to Sail in the South Pacific

The best time to sail in some of the best sailing destinations in the South Pacific such as Tahiti, French Polynesia, and Bora Bora is between May and October. During this period, the weather is more favorable.

‍The rains are less frequent and chances that you might find yourself on the wrong side of huge tropical cyclones are almost nonexistent. This is a dry season in the South Pacific and it's a perfect time for weddings and holidays. So if you've been planning to take your beloved partner on a sailing honeymoon, May through October might be the best time.

The Best Time to Sail in Bermuda

Although the Bermuda triangle is a lot more famous than Bermuda itself, this North Atlantic destination is widely revered for its pink-sand beaches and distinctive blend of British and American culture. As one of the best sailing destinations in the world, the best time to sail in Bermuda is between May and early August.

Unlike its Caribbean neighbors, Bermuda is less affected by the hurricanes and the weather remains temperate year-round. You should, however, stay on the lookout between late August and October, which is the hurricane season in Bermuda. 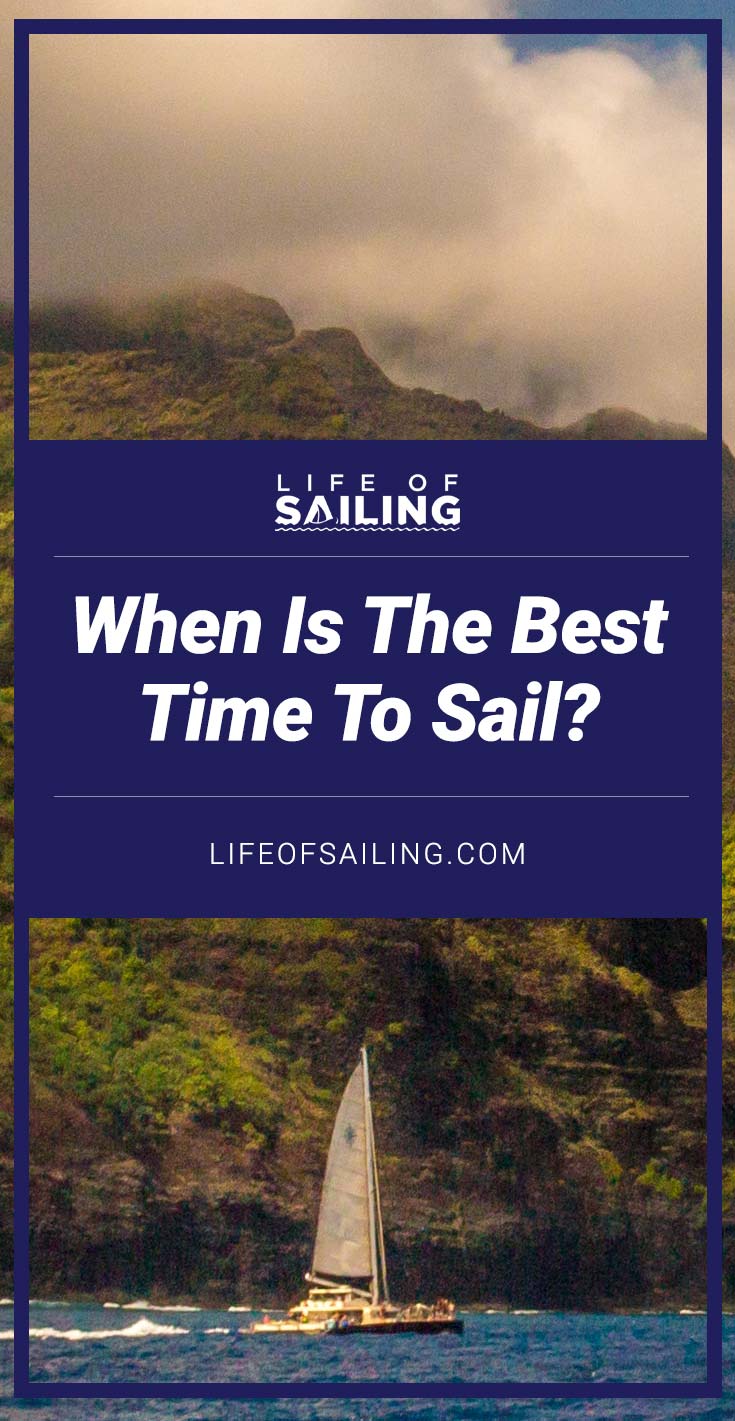