How Fast Do Sailboats Go? (And How To Get Faster) 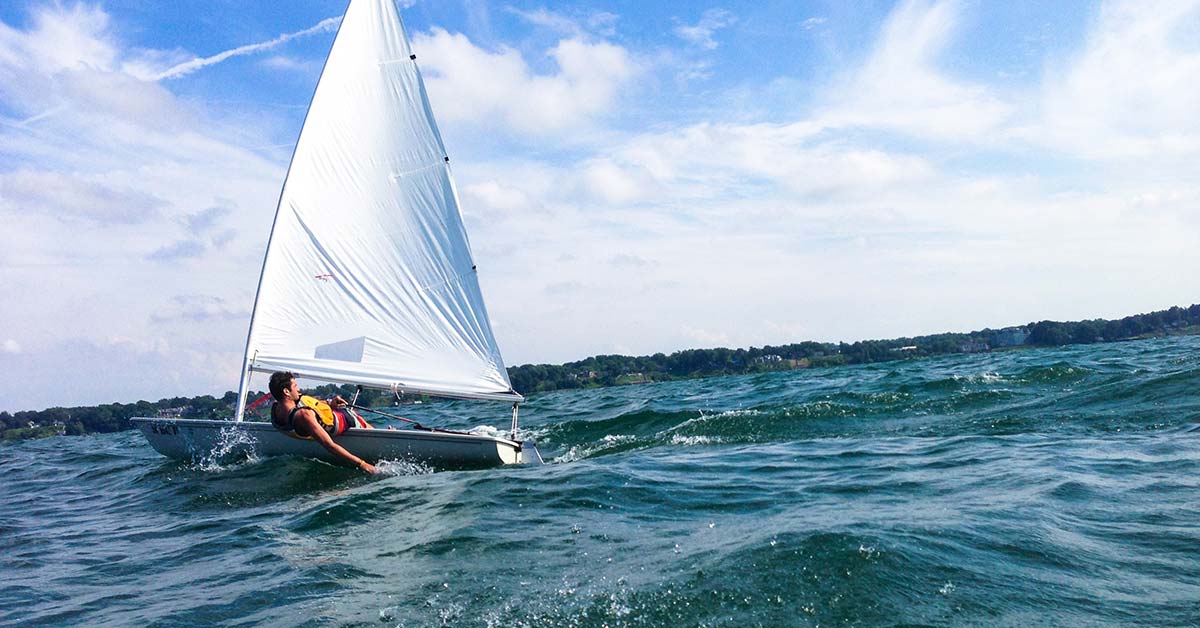 Going fast in a sailboat can be lots of fun. But what is the average of a sailboat? Well, let's find out.

The delight and gratification that comes from speed can be a big plus for adrenaline-seeking sailors. Well, nothing can fire up the adrenaline more than having a speedy boat ride out on the water. This is essentially why having an idea of how fast a sailboat can go is of great importance. When it comes to looking at the speed of a sailboat, it can be crucial to consider the types of activities that you'll be using your sailboat for. In fact, your sailboat should only be considered ideal if it meets the level of expectations required of it in terms of speed and activities on the water. Even with this, the speeds of sailboats can vary based on several factors. But what is the average speed of a sailboat?

Let's get into the details.

The nautical measurement of speed is the knot. According to the World Sailing Speed Council, one knot is equal to about 1.15 mph. The knot measurement is dependent on the circumference of the Earth. So if your sailboat is cruising at an average speed of 1 nautical mile per hour, it means that it's cruising at a speed of 1 knot.

Modern sailboats have GPS tracking devices that can be used to measure the distance covered, as well as the speed at which the sailboat is sailing.

Factors that Determine the Speed of a Sailboat

Different types of sailboats can attain different speeds. There are several factors that can determine the speed of a sailboat. Let's take a look.

The Length and Size of a Sailboat

Well, the ability of a sailboat to go fast depends on the harmonizing act between its length and the power that drives it. When a sailboat moves through the water, it creates a pattern of waves. These waves include one along the side of the sailboat, which produces a ridge of water at the bow and a trough at the stern.

If the length of the wave is almost equal to the length of the boat, it creates a huge ridge that shoves the sailboat back into its trough, thereby slamming it up against an almost dense wall of water resistance. This then gives the sailboat sufficient speed to lift its bow out of the water and the ability to skim above the bow waves while allowing it to overcome the resistance that the water or the waves create.

A sailboat, of course, needs a lot of power to get over the hump in the resistance curve. So a longer boat will have a higher speed than a shorter boat. This is because a longer sailboat will create longer waves across its hull and move faster. On the other hand, short sailboats tend to generate shorter waves, thereby will have reduced speeds. In essence, it's almost impossible for a sailboat to travel faster than the speed of a wave if the wave is longer than the boat.

In most cases, boat designers create extreme lengths to get boats over the mound of the wave resistance. While a lightweight boat can easily achieve this, it can leave you shorthanded in heavy winds as it can be easily pushed by the winds. Again, it may not have the stability needed to carry enough sails to get the appropriate power to sail on the water. So if the boat is light, it should at least have a double hull to at least compensate for its instability.

The Shape of the Hull

This may be hard to believe but some hulls are more efficient than others when it comes to creating the wave resistance that is needed to move the boat. Generally, hulls should be very slim and carefully shaped. Keep in mind that a sailboat that has a hull that's shaped like a fat tub will not be as fast as a sailboat with a very slim hull even if they're of the same length.

A proper indication that the hull has the ability to be faster depends on its aft or buttock lines. If a hull has a straight line from the lowest point of the hull to the transom and the transom is a little bit wide, the boat will not only be stable but will be much faster. On the contrary, a hull that curves a lot but has a narrow stern may not be that fast. In essence, hulls play an integral role in slicing through the water and do not push water aside and down.

Comparing the Speeds of Catamarans and Monohulls

Are catamaran or trimaran hulls more superior to Monohulls in terms of speed? Well, cruising on a sailboat with a cat hull will be much faster than cruising on a sailboat with a monohull by 25%-30% if the two sailboats are of the same length. A catamaran hull will not only achieve speeds of a racing monohull but will be more comfortable to sail on.

A tri-hull is even much better in the sense that they're generally designed towards the performance end of the spectrum. They will, therefore, double the speed of a racing monohull.

The only downside of a cat and trimaran hull is that they're more sensitive to loading and their performances will significantly suffer if they're loaded. On the other hand, a monohull can perfectly handle loading and this is a huge advantage is you're planning to sail with a crew. To this end, you should consider keeping your cat or tri boat as light as possible if you want to maximize speed. We all know that keeping your sailboat light is as difficult as they come but it's of importance if speed is your main goal.

Most average sailboats are designed with monohulls. They're generally displacement hulls designed to split through the underwater. This not only stabilizes the boat but slices through the water smoothly. If you want to make a monohull sailboat much faster, you can consider raising the entire hull above the water.

Unlike monohulls, cats and trimarans are located on top of the water. This means that they'll be displacing less water, thereby making them a lot faster. The only downside is that this design will make the boat less stable, which can be a cause for concern given that safety should always come first while on the water. This is essentially why catamarans and trimarans have two and three hulls respectively. This will, however, make the boat extremely buoyant.

Waves play a critical role not just in the speed of your boat but also in the safety of your boat. We all know that waves are very unpredictable. They can be calm and gentle but can suddenly become wild, confusing, irregular, and angry.

Generally described as freaks or rogues, waves can be very dangerous. They can bully your boat and attempt to roll it over. Waves can also make your boat faster or slower. As such, waves can either positively or negatively affect the speed of your sailboat. Given that calm waves cannot be appropriate in achieving the maximum speed of your boat, the right wave condition that should enable your sailboat to move faster should overlap and interfere in the right way.

The wind is the only thing that propels sailboats. The wind will fill up the sails, which is then used to move the boat. Both true winds and apparent winds can be integral in moving the boat forward. True wind is essentially the type of wind you feel when you stand still and it's what pushes a boat. Needless to say, strong winds may move a sailboat faster than calm winds but this may depend on the wind direction.

How to Improve the Speed of Your Sailboat

Having looked at the average speed of a sailboat, as well as factors that may affect its speed, it's important to highlight how to improve the speed of your sailboat.

You may have a lot of difficulties reaching your targeted speed if the weight of the crew exceeds the appropriate capacity of your sailboat. This is because there will be some sort of drag and tension and this may significantly hinder the speed at which the boat travels. In essence, a lighter boat may be a lot faster than a heavier boat. This is what you should do.

The settings of your sailboat can either negatively or positively affect its speed. For instance, you should make sure that the mast rakes, mast step position, shroud tensions. Jib car position, vang tension, and keel position, as well as any other part of the sailboat, are perfectly set to make the boat faster.

You should compare various settings and figure out which type of settings gives you maximum speed. Here are some of the things to do.

The technique you use on your sailboat can make a difference when it comes to your speed. Techniques such as steering and trimming can be a huge speed factor, particularly when the conditions at sea are difficult. You should also have varying trimming techniques. Here are some important skills.

These factors can be of great importance in increasing the speed of your sailboat. You can use them efficiently next time you want to be up to speed.

Sailing speed is, without a doubt, one of the most favorite discussions among sailors. Most sailors often try to figure out how to make their sailboats faster or why a given sailboat is faster than another one. In essence, the average speed of a sailboat ranges between 4 knots to 15 knots but this may depend on the size and type of the sailboat, as well as other factors. This means that the average speed of sailboats is 8 knots but there several factors such as the type of the hull, waves, and wind conditions can affect the speed of your sailboat.

It's, therefore, important to know how these factors may affect your speed and what you need to do about them. For example, your sailboat may not be as fast as you may want if it's not properly prepared or maintained.

How Fast Do Sailboats Go? (And How To Get Faster)