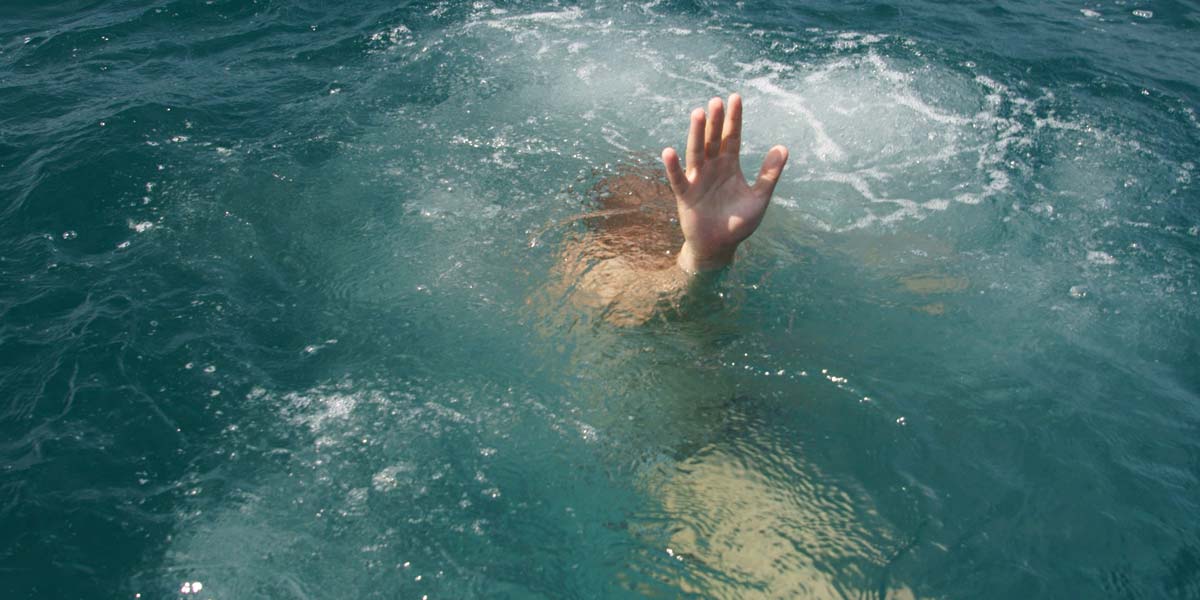 “Man Over Board!” These are the words no one is ever prepared to hear.

You’re sailing along on a broad reach going six knots. The sun is shining and the day has been one for the record books. That’s when tragedy strikes.

You drift a little too far downwind and your boat accidentally jibes. The crew is cleaning up lines on the cabin top and bam- the boom slams over and launches your brother-in-law overboard.

What do you do?

When someone goes overboard is turn the helm 90 degrees, tack over and fall off to 180 degrees for a count of 6 seconds. Then head upwind to 000 and back wind the main as you come alongside the person in the water.

When you get him alongside, now all you have to do is get a line around that 180 pound unconscious man who has a severe head injury and is slipping in and out of consciousness, rig up a hoist on your boom and haul him aboard. Once you get him on deck, call May Day May Day May Day on Channel 16 and recount the details of your emergency to the USCG.

The Fallacy of MOB Procedures

The fallacy that anyone can perform this maneuver, whatever you name it, is insane.

Let’s just argue for a moment that maybe you can recall all the steps some old Navy researcher came up with in 1960 to get a US Navy destroyer to not-so-effectively turn a Destroyer around to pick up a stricken sailor. The truth is you are never going to get a 180 pound man hauled four feet up over your rail on a calm day, let alone in moderate chop with 15 knots of wind blowing.

The idea that any of the methods for MOB recovery (Quick Stop, Williamson Turn, Figure 8 method) would work to recover a human being from sea is a gimmick sailing schools and sailing credentialing organizations have come up with to get you to pay them money. It’s busy work for one of five days for a certification that is based entirely on attendance and not on skill.

I contend it no more prepares you to recover a person in the water than does watching a Youtube video on MOB recovery and reading an article on the internet. Not in the real world anyway. I am telling you that as a person who has taught, taken and performed more of these “exercises” than pretty much anyone alive today.

Let’s break it down and see where things can go wrong.

Of all the methods of MOB recovery, this one is my favorite.

The idea is maintaining constant speed, you put your helm over to 60 degrees relative and count a few beats and then come back to between 160 and 180 degrees on a reciprocal course so that you can bring your ship back to the position where the person went overboard. If you have any doubt about my assertion that this came from an old white man in the Navy in 1960, look at the Old man himself performing it in Hawaii in a video I found on Youtube. https://youtu.be/hbYpDYMjfpo

I am not saying that Capt Williamson was wrong and that it never worked, but the idea that this maneuver can work on a 30 foot sailboat that is full of civilians in open water in an emergency is just too much for me to believe.

Say you do get your boat turned around on the reciprocal course, will you have the awareness to center your main sail so you don’t jibe it again, give the command to get the MOB hoist that you spent $500 on for this and only this exact situation, and will you have the awareness or even the ability to pick the person up on the correct side of the vessel which no one seems to agree on? All these things need to happen for this maneuver to work properly and by the way you have never ever done this in real time ever before either.

It’s just too much for me to believe that anyone could pull this or any of the other maneuvers designed for this purpose off in a time of emergency.

Have you ever really been in an emergency at sea?

I have had some really sketchy moments at sea. Boats sinking from under me, lightning strikes while underway, getting caught in a waterspout, but I have never had a medical emergency and I never want to.

The idea that someone has gone in the water unexpectedly usually means that they have injured themselves in some way and it's usually pretty awful. Upper body injuries like dislocated shoulders, facial lacerations and cranial strikes are all very common and not on my to-do list.

Add that stress to even a good day on the water and it's tough to even remember your own name, let alone how to maneuver your boat.

Accidents only happen in good weather and bad weather

There are only two times when accidents happen. Day and Night. They happen when you least expect it and it is never because you are prepared.

There is one body of evidence that I cite in safe boating classes I have taught that says accidents happen on the water on a summer day in the afternoon in good weather. That makes sense because A) you are more likely, statistically speaking, to be out there at that time and b) you’re guard is down because you've been boating all day, you're tired and you're not paying attention.

The other body of evidence that bears witness to accidents at sea states that when weather turns foul, visibility drops and stressors are at the maximum, accidents occur. I have broken more stuff on my boat in heavy wind and that is when equipment fails and accidents happen.

There is never a time to let your guard down on the water and so therefore we must assume that the only common variable for people falling overboard is it is either day or night.

The fact that MOB Recovery has to take place at the worst possible time means that the more complicated a step by step recovery method is the more likely it is to fail. Even simple maneuvers like the quick stop method where you simply turn your boat around and go head to wind while stopping your boat by backwinding you main are impossible when you have just seen someone you love get thrust in the way of oblivion. (I tried to find a royalty free diagram of the quick stop method and they are all copyrighted- if it’s such a great maneuver to save lives why do they need to make money off of it?)

In situations like this, the phrase Keep It Simple Stupid (KISS) takes on new meaning.

I would not curse the darkness without lighting a candle and it is with that spirit I offer the only failsafe way I know of to recover an unconscious person from the water.

The Life Sling costs about $200 from your favorite marine mega store and is attached to the stern rail of your boat. It comes with an all weather bag and consists of a long polypropylene line attached to a flexible horseshoe buoy that is always at the ready when a person goes overboard.

All you have to do when an emergency strikes, is open the bag and toss the horseshoe overboard. You then drive in circles and wrap the person in the water up with the line and then pull them in.

It's simple, elegant and if you want, you can use the buoy as a harness to lift the person out of the water. Otherwise stop your boat, attach the line to the person and to the boat with their face out of the water and wait for the USCG to show up. (Presumably you had someone call them immediately after the person went in the water).

One of the best demonstrations I have seen on how useful this buoy is comes from SV Delos when they performed a man overboard drill at sea.

In the video below, Brady discusses the fear he feels watching the boat sail away from him. Even as it is warm and beautiful and they are a boat full of scantily clad gorgeous adults on a picture perfect boat, the fear they all feel when doing just a drill is palpable because they are in the middle of nowhere and if anything goes wrong they are screwed and they know it.

This video is the most real drill I have ever seen: 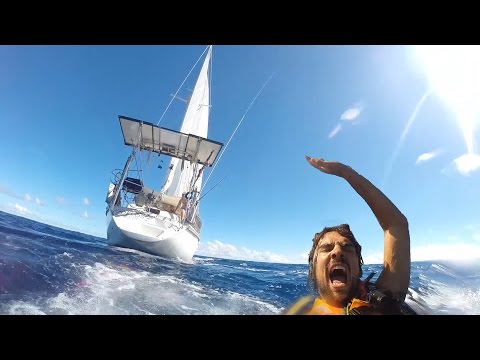 If you can’t spend $200 on something that will save your loved one’s life, then you really shouldn’t be on the water. Just in case you can’t put $200 bucks together to buy a brand name Life Sling for your vessel, my wife and I were spitballing on how you could make one for yourself.

What you will need is 150 feet of polypropylene line, a type I or II pfd (the toilet seat looking ones will work but I like the weight of a type 1 offshore jacket), a sea anchor (anything that can open up and catch water will work.

With those supplies you should be able to cobble together a system that could compare to a life sling if you didn’t have one.

Here are the step by step instructions.

Now I am not saying that that is guaranteed to work. Nothing can ensure that something doesn’t go wrong because remember there are always 101 variables that can mess things up.

Calling the USCG is probably one of the most important things you can do even when the person is conscious and helping. They have the gear, the training and the know how to save lives and in this situation it’s better to call them and not need them, rather than need them and not call them.

If you are too far out and help is too far away, the only thing to do is something. Far too many people die on the water because the people they need to help them do nothing. People freeze up in high stress situations, so doing anything is better than doing nothing.

When someone falls overboard, throw everything and anything that floats at them. A large debris trail will make it easier to spot them as they drift away and will give them that much more to hold onto to keep them afloat.

If you never have to use your life sling, consider yourself lucky. It doesn’t hurt however, to do a drill every so often either and try it out when your crew needs to realize the dangers of a life of sailing.

Until next time, do good, have fun and sail far. Thanks for reading. 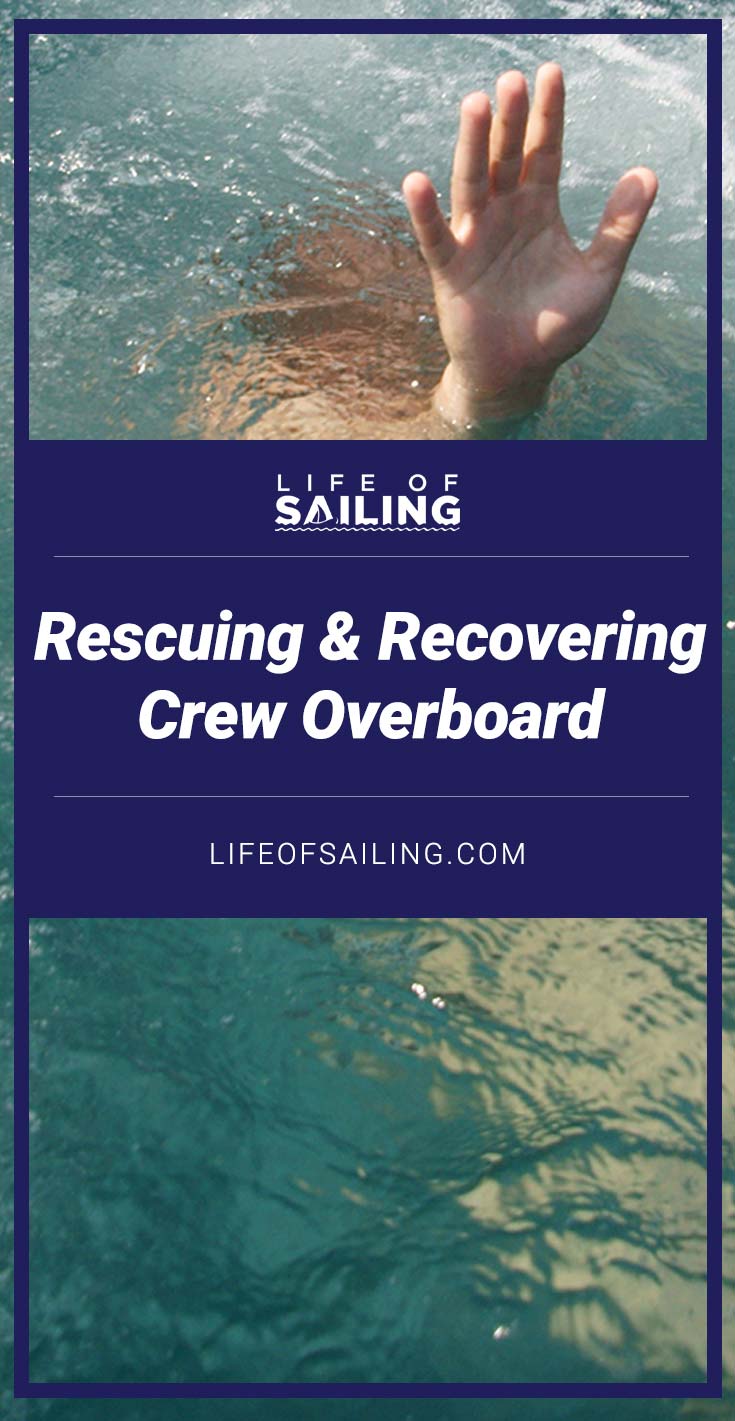