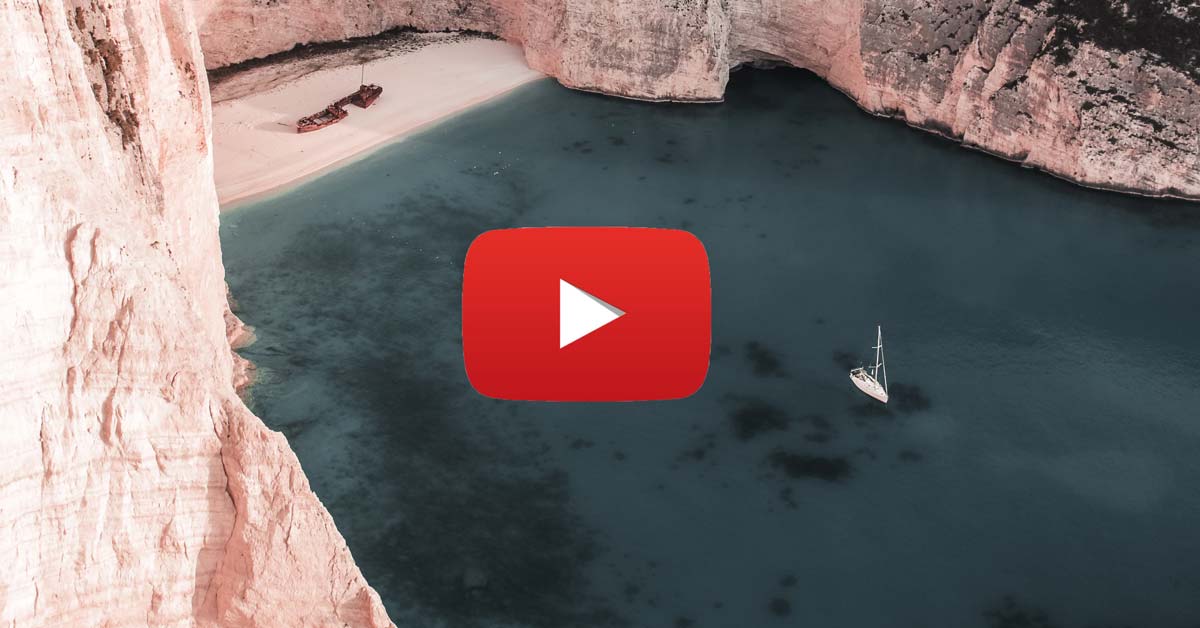 There are a lot of pessimistic individuals out there who are probably trying to dismiss sailing YouTubers and the massive audiences as another ascendancy of what might be referred to as the "couch-potato" society. Whatever your opinion on this matter, we strongly believe that sailing YouTube channels is an excellent and modern way of exposing our beloved sport not just to sailors but to other people as well. And unless you've been living under a rock, you've probably heard or even watched several sailing YouTube channels. But which ones are the best of the bunch?

This Australian couple has so far sailed over 90,000 nm across many oceans and is inspiring millions of viewers to explore living on the ocean as an alternative option. This lovely couple sustains its sailing lifestyle publishing weekly YouTube videos. Having received noteworthy media attention for sailing with Greta Thunberg from Virginia to Lisbon to raise awareness on Climate Change issues, the couple has attained patrons who are always willing to fund their travel and sailing expenses.

Onboard the La Vagabonde, they have established roles. Whitelum is tasked with taking care of boat maintenance and sailing logistics such as checking the weather and planning ahead of sailings while Carausu is tasked with cooking, cleaning, and editing the videos.

When Brian Trautman bought a sailboat 2008, he had never envisioned that he would be so immersed in it that it would become his home; a part and parcel of his lifestyle. More than a decade later, this sailboat has covered more than 70,000nm, visited over 46 countries, and helped in creating more than 200 YouTube videos.

As one of the original and the best sailing YouTube channels, Sailing SV Delos has become a sensation among sailors as it documents the travels and adventures of a lovely crew aboard the sailing vessel, SV Delos. The crew often includes the boat owner Brian, his brother Brady, Brian's wife Karin Syren, and crew member Alex Blue. The team also invites crew members to help with sailing, boat maintenance, cleaning, and, of course, filming.

Sailing SV Delos has always kept it real and chronicled several ocean passages including some of the most challenging and intense weather conditions such as a severe lightning storm that the crew had to deal with on their way to Madagascar.

With his experience as a former electrical engineer, Brian Trautman has been able to make several improvements to the boat to ensure that they remain environment-friendly whenever they sail. The crew has also contributed to several philanthropic activities such as giving $50,000 to charities and contributing to restoration efforts in Dominica after the island was ravaged by Hurricane Maria.

Gone with the Wynns

The couple started by chronicling their travel adventures by buying an RV and undertook an epic road trip in search of endless exploration across the country. They went around North America and even trekked around Alaska and admit that they'd have stayed there forever had it not for the fact that they suffer from what they term as incurable sedentary life phobia.

The couple then decided to sail around the world and have been on a sailing voyage of more than 10,000nm. The couple has always been inspired by their unparalleled desire to explore, grow, learn, and share their travel experiences. To them, sailing is far more surreal as it's almost akin to exploring the world as it was done in the 1400s.

A lovely couple named Troy and Pascale, shares with the world their off-the-cuff voyage in remote Australia in their 30ft yacht named Mirrol. With their minimalist lifestyle, the couple has endeared itself to millions of viewers across the world who are always eager to see how they do more with less.

If you've been looking for a sailing YouTube channel that has no fakery and no fuss, RAN Sailing is meant for you. This channel revolves around the incredible life of Johan Hammarlund and Malin Lof, an adventurous Swedish couple who were looking for a different and unique lifestyle.

Four years ago, the couple decided to sell everything they owned and set sail on its 1987 custom-built Beason aluminum sailboat. They've sailed to various destinations including their homeland of Sweden, Alaska, and Seattle. In 2019, the couple welcomed a daughter, bought a bigger boat, and continues sailing the world as a family.

They've also sailed the Pacific and have attracted even more fans across the world as they showcase an incredible Swedish lifestyle with no fuss. And despite the Coronavirus pandemic, they've assured their fans that they'll ensure that they never leave the couch as they set sail despite the current situation.

You've probably wondered whether it would be possible to bring your lovely pet to your sailing escapades. Well, a young couple known as Billy Swezey and Sierra Groth have been showing that it's possible and very inspiring thanks to their Tula's Endless Summer sailing YouTube channel.

Their sailing adventure started in 2013 when Billy bought a dilapidated boat in an abandoned boatyard in New York and set about restoring the boat. Billy, who describes himself as a water bug, then met the lovely Sierra in Florida. Since then the couple together with their dog, Jetty, have been inseparable as a Dream Team and have shown the world that taking up sailing as a lifestyle is very possible.

This lovely family has sailed in the Bahamas, the Caribbean, and other destinations on their Tula, as well as other boats. Bill describes himself as a jack of all trades who has been surfing, kiting, diving, paddling, and doing everything in the ocean. On the other hand, Sierra is a lovely girl who wishes she had the power of breathing underwater. And what about, Jetty the Gypsy? Well, this dog has seen and done a lot more than most people will ever do in their life.

In essence, Tula's Endless Summer is a superb sailing YouTube channel that vividly chronicles the life of a young and lovely couple going about their sailing escapades.

Neither Dan Deckert nor Kika Mevs grow up sailing and never dreamt of buying a sailboat just to cruise around the world. But soon after graduating, this gorgeous couple founded a successful architectural design-consulting firm as a way of earning a living. Fortunately, Dan and Kika soon realized that the rat race wasn't their cup of tea. They both had dreams of traveling the world and seeing for themselves of the earth was a beautiful place. Again, they had been inspired when a friend advised them not to buy a couch!

Having realized that the conventional life wasn't meant for them, the couple bought a sailboat named UMA even though they didn't know anything about sailboats or sailing. They had to Google their way out and restored their lovely boat to their liking. They came up with a 5-year plan to learn step by step before sailing around the world. The plan was to start with a small boat and learn how to sail on a lake before getting a vessel that they could use for their offshore adventures.

Despite the steep learning curve, this lovely couple had solutions to many problems during their sailing escapades and now is showcasing their sailing escapes in one of the best sailing YouTube channels around. So far, they've visited 22 countries, covered 18,358 nautical miles, and have incredibly used zero gallons of diesel.

With one of the most-watched sailing YouTube channels on the internet, Bobby White and his partner Laura began their sailing escapades after Bobby suffered a medical scare in his late 30s. He was good-looking, had a flourishing career as a corporate pilot, flying the rich and famous around the world. He had suffered a stroke and his career was gone just like that!

After healing, Bobby sold everything he owned and bought a C&C 37-foot sailboat. Along with his two lovely dogs, he set sail from his native Texas to the Caribbean. He made the wise move to document his new life and that is how Sailing Doodles came to be. With his partner Laura, Bobby admits that chronicling their sailing journey on YouTube isn't as easy as many people think but it's certainly worth it to share and inspire others in a very cool way.

Who said that sailing was only a man's stuff? Well, if you've been thinking so, you might want to have a second thought. Nike Steiger has been inspiring girls all over the world to take up sailing. Through her Whitespot Pirates YouTube channel, she's been documenting her solo-sailing escapades after she bought an abandoned boat in Panama.

For the last 6 years, she's been sharing unscripted videos of her voyages in her 30-foot aluminum boat named Karl. In addition to keeping it real with her adoring viewers, she's comprehensively detailed the wonderful highs and cyclonic lows of her sailing life. To top it all, this is an award-winning YouTube channel that documents Nike's astonishing voyages.

It takes a lot of guts to sell all your possessions and begin sailing around the world. While many couples cannot even contemplate taking such an action, it's exactly what Matt and Jessica Johnson did as soon as they realized that their life had become boring as a result of spending a lot of time in front of the TV.

But instead of taking up yoga or exercising, they decided to make a radical change by selling everything they had in their possession and began sailing around the world. Today, MJ Sailing is one of the most popular sailing YouTube Channels. This is a couple who left everything including their careers and took up a great hobby without ever regretting it.